The paddle steamer SS Constitutionen was Norway’s first steamer in 1826, but it took considerable time before Norway had a steamship fleet of any significance. 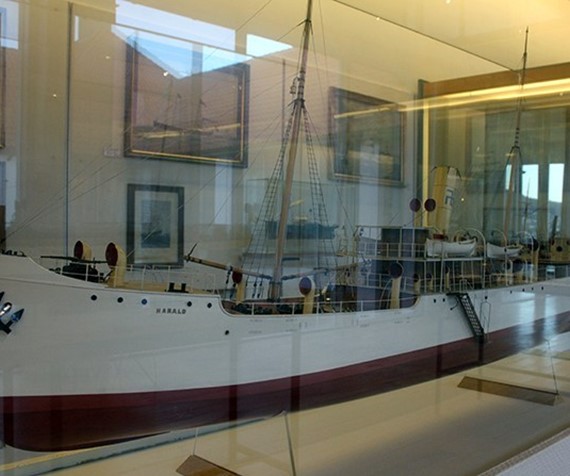 The paddle steamer SS Constitutionen was Norway’s first steamer in 1826, but it took considerable time before Norway had a steamship fleet of any significance. Bergen was in the forefront in the transition from sail to steam in Norway. The Bergen Steamship Company was established in 1851 as Norway’s first privately owned steamship company and started a route from Bergen to Hamburg with the paddle steamer SS Bergen. In 1883, Bergen’s steamship fleet exceeded its fleet of sailing vessels. Not until the early 20th century did the shift from a sail-dominant fleet to steam power take place for Norway’s merchant fleet as a Whole.

Apart from models of the SS Constitutionen and the SS Bergen, this part of the exhibition includes models of several other ships from the early steamship era in Norway. This includes steamers that were used in the fruit trade in Central America where Bergen steamers were prominent and the SS Kong Sverre which belonged to Norway’s first transatlantic steamship line (the Norwegian-American Steamship Company during the 1870s). Included in the exhibition is also a model of the U.S. paddle steamer SS Savannah which, in 1819, was the first steamer to cross the Atlantic.